A pandemic of paradoxes 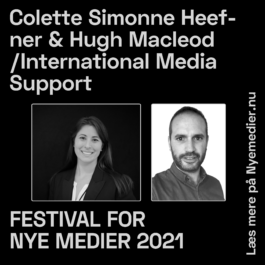 Q: Can you shortly introduce the work that you are doing at International Media Support?

We believe that ensuring the viability of public interest media is paramount and quality content, audience engagement, business development, safety, gender equality and policy and law reform all contribute to viability. IMS supports journalism that has the potential and intent to bring about positive change – journalism that can further the accountability of people’s human rights."

Q: What developments did you see in the media landscape during the pandemic, according to your findings in your report “Covid-19 and the media: A pandemic of paradoxes”?

“The single most threat to the media landscape during the pandemic was the drastic impact it had on the viability of public interest media – revenues plummeted. According to a major study by the International Center for Journalists in June 2020, of 1406 journalists with knowledge of their new organizations financial losses, 60% reported their revenues were down by over half (p. 63). The paradox here? As revenused collapsed, audiences sharply increased as accurate, reliable and timely information became, literally, a matter of life and death.

There was also a decrease in access to reliable information. We saw governments around the world obstructing journalists from getting the most up-to-date data concerning the spread of the virus (p. 14). This attempt to control information went in hand with a resurgence of authoritarianism. Another paradox presents itself here as those with the most reliable information at their disposal and the greatest responsibility to distribute it – state officials – were also some of the most likely sources of inaccurate information in many contexts.

COVID-19 relatedly brought on “The Infodemic” of misinformation. As social media has given the general population a wider range of information sources, platforms like Facebook and Twitter became the principal vectors for dangerous information during the pandemic (p. 34). As the WHO correctly pointed out, this hasn’t just been a battle against the virus, 'we’re also battling the trolls and conspiracy theorists that push misinformation and undermine the outbreak response' (p. 36). Politicians with authoritarian dispositions have also played a considerable role in perpetuating the infodemic as social media platforms allow them to directly communicate to their electorate, by-passing the usual scrutiny of media."

Q: Did the pandemic escalate or challenge existing developments or tendencies in the media landscape – and if yes, how so?

“In this publication, we underscore the general consensus that the International Center for Journalists and UNESCO warn of in their November 2020 report: 'Online violence is the new frontline in journalism safety – and it’s particularly dangerous for women' (p. 52). However, it appears that COVID-19 has simply exacerbated an already growing problem of online harassment of women journalists, rather than being the significant cause of it. As one of our interviewees pointed out, physical threats against journalists were lower in 2020, but the rate of online harassment was higher. Foundation for Press Freedom Director in Colombia Jonathan Bock further noted that 'the growth in online harassment against women has been exponential … but that was occurring before the pandemic, it’s not related to COVID' (p. 53).

Also, as business models were not so strong to begin with for many media outlets around the world, so many were unsurprisingly left heavily impacted by the loss of ad revenue once the pandemic began. 'Online consumption went through the roof, but without any monetization strategy', recalled interviewee Henoke Fente based in Ethiopia (p. 64). Accordingly, the pandemic has compelled a renewed and stronger focus on diversifying revenues to support economic viability. Moving beyond what an outlet can do for itself, the leading recommendation in this report addresses financial instability of media by calling for States to tax Big Tech to subsidise public interest journalism (pp. 74-75). In contrast to virtually all the media outlets that struggled during the pandemic, the deadly virus was a boon to Big Tech, as the seven most valuable US technology companies added a staggering EUR 2.8 trillion to their market capitalism during the pandemic (p. 65). Media outlets and their allies are calling for a piece of this pie and are turning to human rights-based obligations of States to justify this call: Viable public interest media is integral to sustaining strong and stable democracies and therefore crucial to fulfilling citizen’s fundamental human rights."

Q: What will you be talking about at this year’s Festival for new media?

“Knowledge is power and power informs decisions--accordingly, power-holders with the intent to keep their stature can have great incentive to try and influence the kind of information that their electorate has access to.

This is the foundation behind the “Autocrat’s Playbook”, which so many tactics were pulled from by government authorities across the world during the pandemic. From obstructing access to information, intimidating harassing or attacking the media to polluting information environments, we will draw parallels between these evolving strategies to control knowledge flow to what has played out within the media landscape during the pandemic.

Please also allow for our legal flair to shine though as we plan to discuss how to use international human rights obligations to develop and promote media in the context of the pandemic and beyond. As any media landscape is invariably complex and formed from a myriad of rights and responsibilities that can be dependent on one another, human rights law can be seen as a language that names these rights and responsibilities, identifies each unique element and resultantly brings clarity to a complex picture (p. 84)."